In the spirit of fully embracing our England experience, we enrolled the boys in the public school near our home here in Dorking.  Joe and Tom are students at St. John’s Church of England Primary School.  Every weekday, the boys don their uniforms and we walk (well, some of us scooter) to school. 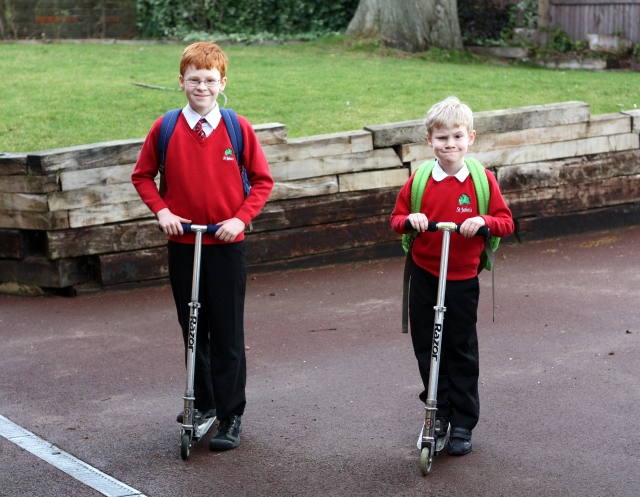 It's hard to get a serious picture of Tom these days.

Joey has adjusted amazingly well to his new school.  He likes his teacher and has already made several friends amongst his classmates.  At first he wasn’t pleased about having to wear a uniform every day, but he became accustomed to it pretty quickly.  He’d stand out even more in class if he didn’t wear the uniform!

This was their first day of school in England.

It was a more challenging transition for Tommy since his only school experience prior to moving to England was nursery school.  Because school is compulsory in England at age five, so we decided to give it a go for Tom.  I won’t lie, the first few weeks were rough for him, and we entertained thoughts of pulling him out.  We chose to persevere, and I am happy to say that he now is doing just fine.  I wouldn’t say he adores school, but he seems content and definitely likes being with other children.

Joe and Tom were very pleased to be awarded certificates of recognition (presented in front of the whole school!) after their first week for doing such a good job adjusting to their new school.

The boys have been participating in many of the afterschool activities that are offered.  At Christmas time, the school did some caroling at a local church.  We were pleasantly surprised to find a photo in the local newspaper of Joe and Tom caroling with their schoolmates! 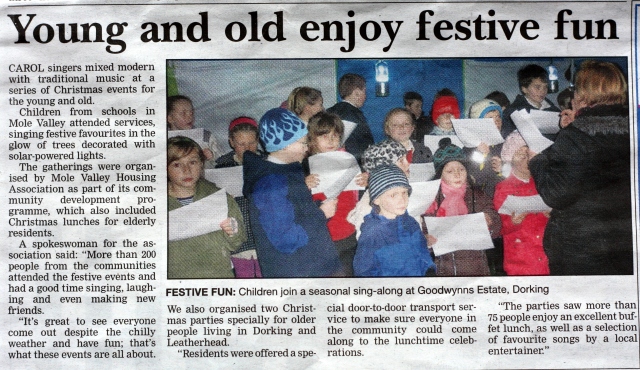 I have started to become involved with the “Friends of St. John’s” group, which is essentially the school’s PTO.  It should be a nice way to be a part of the school community.  We all have been made to feel very welcome at the school, and we have been impressed with the programming and the teachers.  Now we just are waiting for the boys to pick up English accents!