Today was the day for the Paris sight the boys had been waiting for:  The Eiffel Tower.  Rather than take the Metro directly to the Tower, we rode to a stop across the Seine where we could see the tower from the Palais de Chaillot and the Jardins du Trocadero. 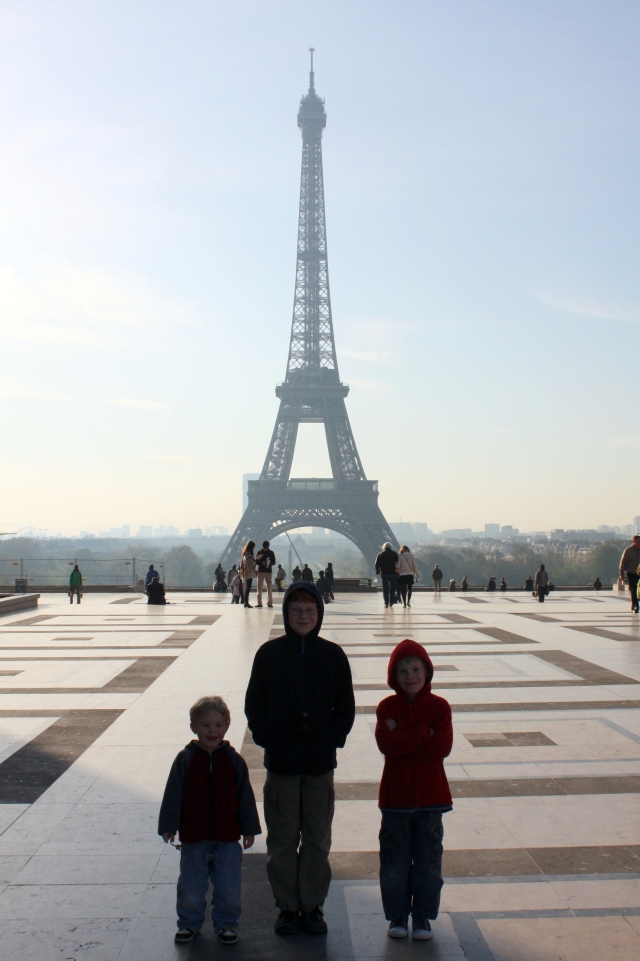 We then walked to the Eiffel Tower across the Pont d’Lena.

Being hale and hardy Mainers, we climbed the 600 steps to the observation platforms.  It was a hike (especially with Sam on my back!), but it was a fun and worthwhile way to get up there. 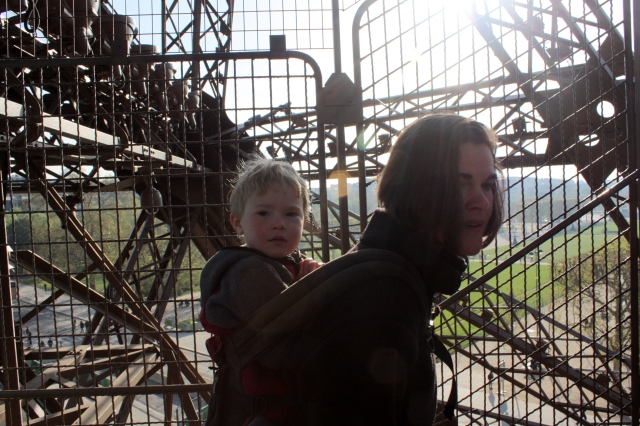 From the second level, we had no choice but to take the elevator to the tippy top.  Paul wasn’t sure he wanted to go up that high, but I think he was glad he braved the trip.  It was a beautiful day to see Paris from above.

After making it safely down from the Eiffel Tower, we wandered a bit through the neighborhood nearby to search for picnic lunch supplies.  Once we were well provisioned, we had lunch in the Parc du Champs de Mar at the base of the Eiffel Tower. 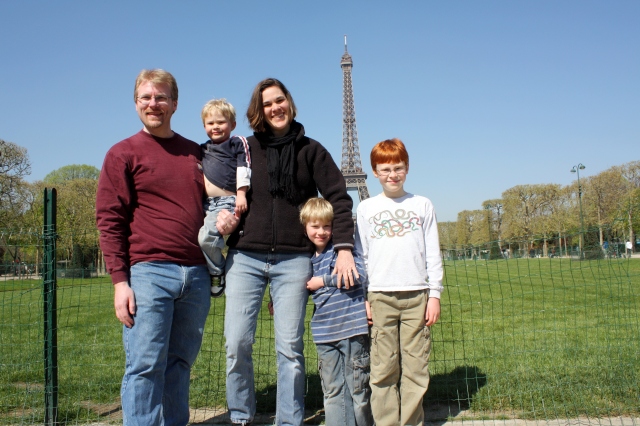 After lunch, we relaxed and let the children play in the Champs du Mar playground.  How amazing is that to play in the shadow of the Eiffel Tower?!  This plan of events became our daily routine during our week in Paris:  sight-see in the morning, have a picnic lunch, play at a playground in the afternoon, and finally squeeze in a little more sight-seeing if everyone was up for it.  It was a schedule kept everyone happy!

From the park, we walked to Les Invalides.   It was a grand and imposing structure. 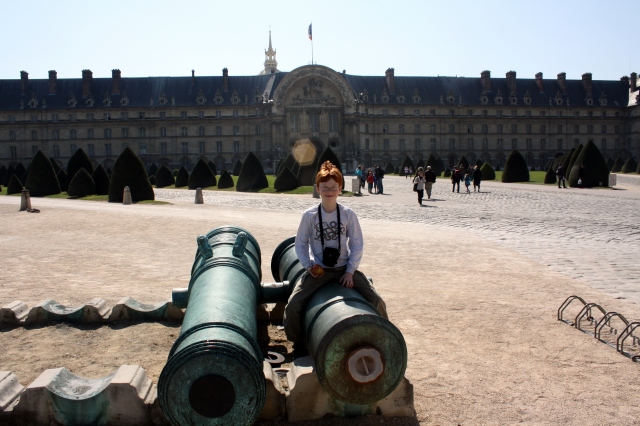 Joey was NOT supposed to be on those cannons, but I got a photo before the guard asked him to get down. Oops.

From Les Invalides, we strolled along the Seine for a while until it became clear that we were all ready to call it a day. 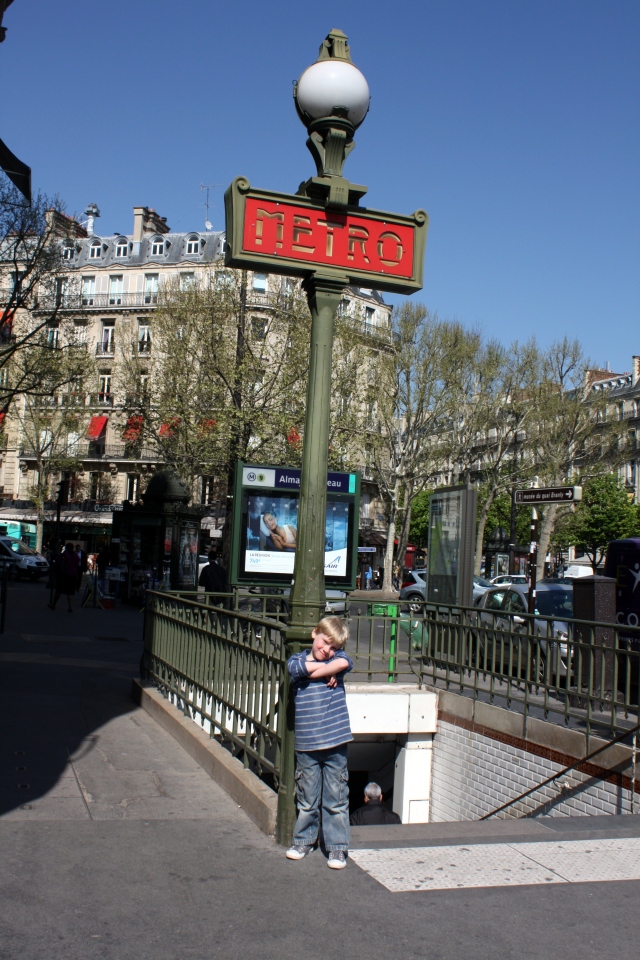 The next morning, we started our day with a visit to one of the local markets in Boulougne-Billancort.  We enjoyed browsing through the stalls checking out the fresh produce, cheeses, and meats.  Paul bought some tea and corsican dried sausage.  Tommy had a morbid fascination with the chickens that were on display at the meat vendor that still had head and claws intact.  He kept wanted to go back and look at them!

From the market, we took the Metro into the Les Halles area of Paris.  It became a daily tradition during our week for the boys to enjoy Nutella sandwiches and a story from Paul on our journeys into the city. 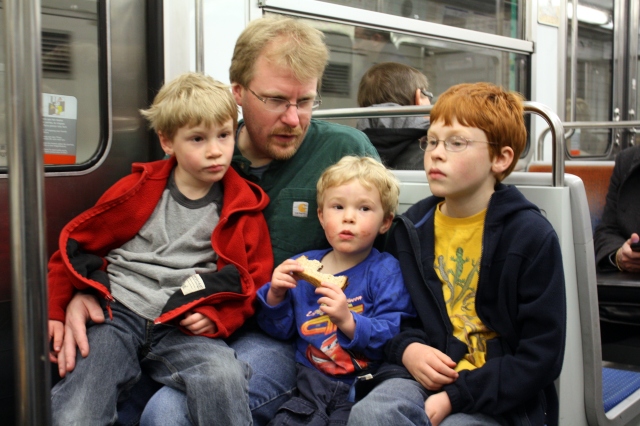 Our first sight was the Centre Pompidou.  While the boys were somewhat impressed with the inside-out architecture of the building, what they really enjoyed was chasing the resident pigeons.

Being the home of former central market of Paris, the Les Halles area has a number of fantastic cooking stores.  We browsed in a few, and Paul bought a tureen (he plans to make homemade pate) at the popular Dehillerin cookware shop.

By now it was lunchtime, so we bought our baguette sandwiches at a little shop and walked to the Seine.  We found a lovely spot with views of Pont Neuf where we ate lunch and watched the boats go by on the river. 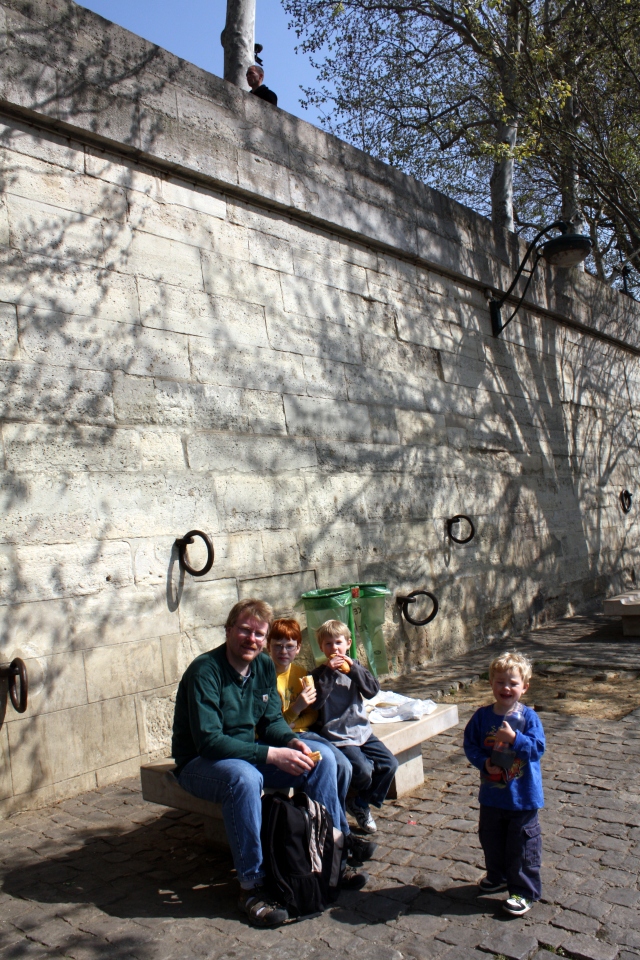 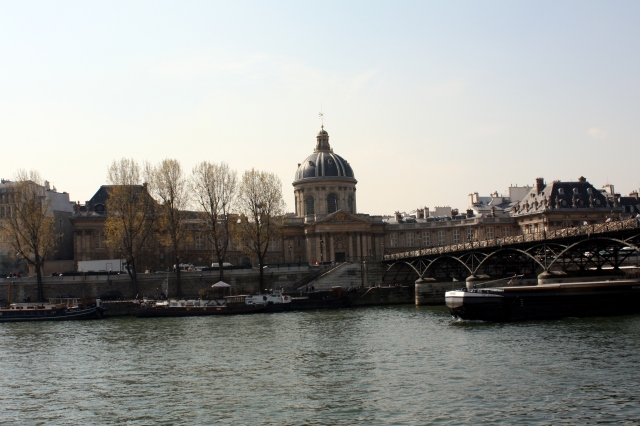 After lunch, we walked along the Seine to the Louvre (which wasn’t open that day).  We waved to the Mona Lisa inside, and continued onward.

We spent the rest of the afternoon exploring and relaxing in the Jardin des Tuileries.  The boys, of course, loved the playground.

On our way back to the Metro to head home, we saw Place de la Concorde and the Luxor Obelisk.

Tommy also spotted the Church of the Madeleine while we were walking through this area.  He was able to recognize it because in preparation for our Paris trip, we had purchased a few books to help the boys be familiar with what they might see on the trip (Not for Parents Paris Everything You Ever Wanted to Know by the Lonely Planet, This is Paris by Miroslav Sasek, and Madeline by Ludwig Bemelmans).  By reading these books with them, the boys really were able to spot and look forward to seeing many of the famous Pariesan landmarks. 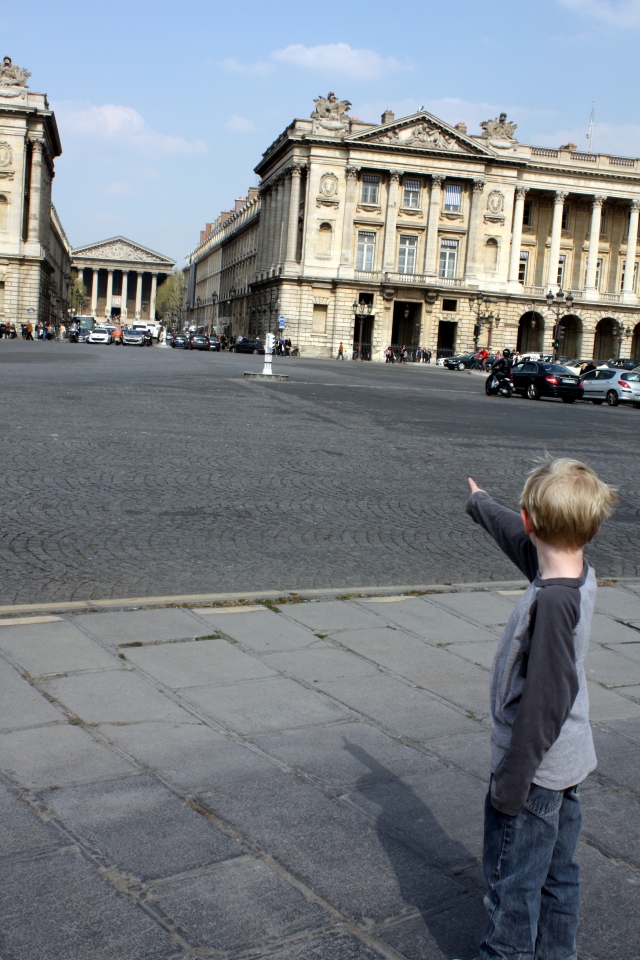